Gauteng is South Africa’s smallest,richest,most urbanised and most frenetic province.

It’s a city built on gold and the dreams of great wealth that this metal always seems to inspire.

It’s all go,go go. eople rush from office to mall to coffee shop; fast cars stream past in a blur on the multi-lane highways and business goes on.

For many people,Johannesburg and Gauteng are synonymous. 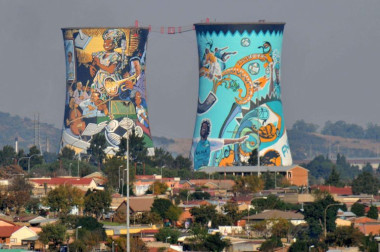 Once the bastion of mining wealth and entrenched white elitism,Johannesburg is still the powerhouse of Africa – but now with an altogether different face.

The once proud, squeaky clean, lily-white streets of Central Johannesburg have been transformed into truly African thoroughfares, and the tall façades of the brash and bold commercial buildings of the central city now look down on an altogether different form of entrepreneurism.

The inner city is being revived – cultural centers are opening, and long-neglected buildings are being renovated.

Part of the city but separate, Soweto is a household name all over the world after the pivotal role its community played in South Africa’s freedom Struggle.

It’s a huge, sprawling, bustling, dynamic settlement of well over a million residents. There is much to see here but you will probably get lost if you try to find your way around, so it’s best to do an escorted tour – at least the first few times until you get your bearings.

At the other end of the scale Pretoria has retained an air of genteel elegance, lounging under its cloak of purple jacaranda trees. It’s a much quieter city than Johannesburg and somehow things do seem a little less frenetic.

Although it’s no longer the capital province, this is the seat of national of government, and where you will find most of the foreign embassies and consulates.

Although Gauteng is very urbanized, there is much you can do to get away from the hustle and bustle. On a Sunday morning you could watch a performance by dancing Lipizzaners – the only show of its kind outside Austria.

Do take the time to visit the Cradle of Humankind, in the Kromdraai Conservancy, where you can also visit a range of attractions including small game farms and caves.

Other options include visiting the Magaliesberg – a pretty area with some lovely country destinations and mountain walks. You could also do a hot air balloon ride, or paddle on the Crocodile River.

You could go horseback riding among some rhinos and antelope, visit a diamond mine, or try a tandem parachute jump.

But, of course, it seems silly to pass up on the opportunity of being in South Africa’s biggest city. Enjoy it for what it is. Go shopping, visit art galleries and explore the city’s rich cultural heritage.

Visit Museum Africa, at the Newtown Complex in Central Johannesburg, and the Apartheid Museum at Gold Reef City. And you’ll just have to sample the many coffee shops, restaurants, pubs and clubs. Enjoy.