The revolving cable car to the top of Table Mountain gives stunning, vertiginous views over Cape Town and its surroundings.

Once on top, viewing decks that literally ‘hang’ visitors over the edge of the mountain offer wonderful photographic opportunities. Although queues have improved it is still best to avoid the peak times (mid morning to mid afternoon).

The cable car can be reached by taking Kloof Nek Road to the roundabout and then taking the cable car approach road at the top. It does not operate in very poor visibility or in high winds

Please take a sweater with you even if it is a hot day as the weather can be changeable on the mountain. In winter you should take a warm jacket.

Open daily. First cable car is at 08:30 and last cable car varies according to season with early evening rides in summer.

“By any standard, the Cape Town region of South Africa is one of the most beautiful and compelling places to visit on the planet.

Here, in addition to a city with fascinating historical sites, excellent museums, vibrant markets and a handsomely restored waterfront.

The Western Cape is an anomaly.

Perched right at the tip of the continent,and straddling two oceans, it is completely unlike anywhere else in Africa – probably the world.

With its hot summers and cool rainy winters it’s just perfect for the production of fruit, grain and wine. 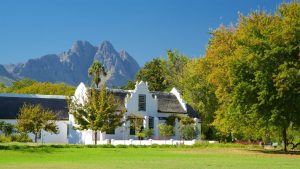 Time moves to the rhythm of the grape – slow in ripening and frenetic in picking season. There are so many wine farms to choose from.

And when you’ve finished staggering from cellar to cellar, you can head off to the beach, or hike in the mountains. Frolic in some daisies, catch a fish.

Hire a mountain bike and explore the pine plantations – or ride around De Hoop Nature Reserve, where you may also see whales.

And if you’re really into whales, go for a walk along the cliff top in Hermanus, or go out on a boat in Walker Bay.

Spend hours at the V&A Waterfront in Cape Town catching up on your shopping.

Go wild on seafood on the West Coast, or paddle a kayak off Cape Town to see seals,learn to surf.

Ride a horse through a vineyard stopping for a quick taste, of course.

Clamber up Table Mountain and watch the sun set.

Visit Cape Point and decide for yourself if you can see the line where the two oceans allegedly meet or go further east to Cape Agulhas to the official meeting point. 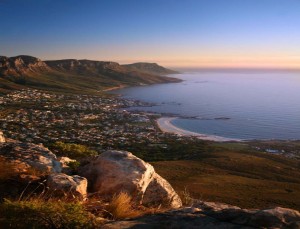 On a summer Sunday afternoon, pack a picnic and hang out with your friends on the lawns at Kirstenbosch waiting for the sunset concert to begin.

Or go to Bloubergstrand, where you can just sit on the beach admiring the fantastic spectacle of Table Mountain rising above the sea on the other side of the bay.

Hire a car and drive up Route 62 to the Garden Route, and you still won’t have seen half of what this lovely province has to offer.

Cape Tow is the major urban center in the Western Province and is a fantastic city and a major tourist attraction.

It is in Africa and of Africa but yet so different.

Perched between the ocean and the mountain and with a National Park as its heart it’s wild and wonderful.

It’s also the oldest city in our country and it has a cultural heritage spanning more than 300 years.

It is in Cape Town that the Rainbow Nation really covers the spectrum as nowhere else in the country do we have such cultural diversity.

Between beautiful Cape Dutch homesteads,elegant Georgian townhouses,traditional dancers with painted faces performing in the city streets,the smell of spicy Malay cooking,the tang of a well-matured wine,and the sound of the snoek horn advertising the wares of fish vendors,this city will fill your senses.

The bells of St George’s Cathedral alternate with the plaintive tones of the muezzin calling the faithful to prayer.

Visitors give a startled jump, and Capetonians calmly glance at their watches when the noon gun booms above the city – a relic from the days of sail when sea captains had to check their chronometers.

You will never be bored in Cape Town.

Table Mountain offers some of the best climbing in the world, and it’s right here in the city.

The surfing is fantastic; the diving is cold but good.

You could go mountain biking or try sandboarding .Go sea kayaking – you may see seals, dolphins or penguins. 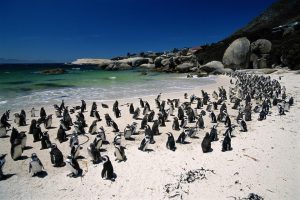 A great thing to do on a full moon summer’s night is to walk up Lion’s Head before dark, watch the sun set on one hand and the full moon rise on the other and then walk down in the silvery light.

If the wind is right, you could fly off Lion’s Head with a qualified tandem paraglider pilot, and land on the beach in time for sundowners.Oh, you’ll never be bored.

If all this sounds too gung ho for you, don’t worry.You can shop till you drop at Cavendish,Canal Walk or the V&A Waterfront where you’ll be spoiled for choice.

There is so much live music,so many temporary and permanent art exhibitions,so many movies,plays and even opera,ballet or symphony concerts,that you will have absolutely no excuse to stay in your hotel room.

Of course,you’ll just have to find the time to sample some Cape wine. You could visit a different museum every day for a week, and you just have to see Robben Island.

Cape Town has something for everyone.

As well as catering admirably for the top end of the market with its many excellent quality establishments, it also has more backpackers hostels than any other city worldwide. It’s also the home of the backpackers special,