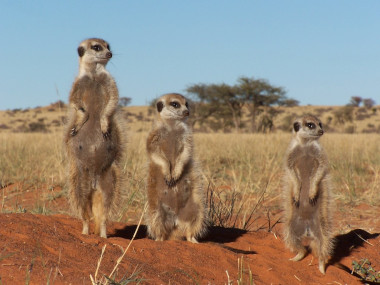 The great Zebra migration,thousands of Zebras migrate to the green lush plains,the flowers burst through,the landscape turns green.Its an amazing contrast,from the desert to the richness of the Okavango Delta.

The Makgadikgadi Pan is a large salt pan in the middle of the dry savanna of northeastern Botswana,and its one of the largest salt flats in the world.The pan,was the large Lake Makgadikgadi,which once was larger than Switzerland dried up a long time ago.

The Makgadikgadi Pans, when in flood during the summer, attract vast flocks of Flamingos and Pelicans as well as other waterbirds however, during the dry season this section of the Park is less rewarding.

The currently dry Boteti river, to the north, has a number of Hippo pools which attract game such as Wildebeest, Zebra and the inevitable Lions. The Zebra migration is one of the highlights of this area.

Camps activities and safari tours are to be found at Botswana Safaris.

Jacks Camp is a magical camp located in the heart of the Makgadikgadi Pans.

Its Luxury tents have been set under a palm grove,making Jacks Camp totally unique in its desolation,quietness,and remoteness

Tswalu Kalahari covers about 100,000 hectares and it is South Africa’s largest private game reserve.Tswalu Kalahari is a luxury remote lodge that can take no more than thirty guests at a time.

The name Kalahari is derived from the Tswana work Kgala meaning the great thirst,or Kgalagadi, meaning the waterless place.The Kalahari has remained a true wilderness area.

The southern Kalahari receives more rain than the other parts of the Kalahari,therefore it attracts a diversity of  wildlife.Its called the Green Kalahari.

Deception Valley Lodge is a luxury lodge located in the Kalahari desert of Botswana.

Its not that far from the Okavango Delta.At Deception Valley Lodge you will have the opportunity to interact with

with the local Bushman who are in the area.

Its a combination of culture,scenery and wildlife.A different way to experience a Botswana Safari.

The pan,was the large Lake Makgadikgadi,which once was larger than Switzerland dried up a long time ago.

Its surrounded by the Kalahari desert, the Makgadikgadi is many pans with sandy desert in between,the largest being the Sua (Sowa), Nwetwe and Nxai Pans.

A dry salty clay crust most of the year, the pans are seasonally covered with water and grass, and are then a refuge for birds and animals in this very arid part of the world. The climate is hot and dry but with regular annual rains.

The main water source is the Nata River,called Amanzanyama in Zimbabwe,where it rises at Sandown about 37 mi (59.5 km) from Bulawayo. A smaller amount of water is supplied by the Boteti River from the Okavango delta.

General
This is the largest game reserve in Botswana and at almost 53,000 sq km (equivalent to Burundi and Rwanda combined) is the second biggest in the world.Renowned for its vast and unspoilt tracts of land this reserve is the place to go if you are seeking to get away from the hustle and bustle of civilization.

Location
Situated in the centre of Botswana ,the reserve is split into two areas, the northern part of the reserve which is the most frequently visited part and the remote southern section of the reserve where visitors are scarce.

Wildlife
Despite the lack of some of the larger mammals such as Elephant, Hippo and Buffalo this reserve nevertheless can be equally as rewarding as the more popular game reserves.

The Kalahari is renowned for its impressive black-maned lions and the habitat of wide open pans makes this reserve one of the best places for seeing Cheetah in Botswana.