A walking tour of Cape Town and then driven out to the townships for lunch in a local township restaurant with a live marimba then a afternoon program in the townships that can include a community garden,some local people to people interaction,local art and crafts etc.

A 3 to 4 hour walk through the historic parts of Cape Town,privately guided,walk at your own pace.

A ferry ride to the Island and then a deep dive into the life of Nelson Mandela and others as they where imprisoned on the Island.

A Sunday township tour including some time at a local gospel church service.

Learn to cook Cape Malay food in a locals home,and then eat what has been made.After the meal your host will walk with you to the local spice shop 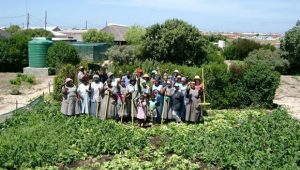 Cape Town is the oldest city in South Africa, and as a result Cape Town’s rich colonial history has endowed the city with some distinctive old buildings in the distinctive Cape Dutch style with its whitewashed walls, ornate gables and thatched roofs.

However while Cape Town may be the oldest city in South Africa with a distinctly European beginning, the area was inhabited long before the Dutch first settled here.

Another interesting place to visit is the Bo-Kaap.The Bo-Kaap is home to the oldest existing community in South Africa that has not been subject to forced removals. Previously called the ”Malay Quarter“, this area housed the many slaves brought out, mainly from Java, in the 17th and 18th Centuries.

Their attractive, brightly coloured, flat-roofed houses, decorative mosques and the sound of the muezzin calling over the city streets have remained relatively undisturbed for all this time. The major threat facing this attractive area is now not forced removals, but gentrification, as image-conscious yuppies move into and renovate the lovely old buildings, taking advantage of the sea views and proximity to the city centre.

The Bo-Kaap Museum documents the history of the area, and a meal in one of the local restaurants is a culinary delight as well as a cultural experience.

Today South Africa’s economic divide is no more apparent than in Cape Town where the ultra rich often live just minutes away from the very poor. But while the townships and Cape Flats may represent the poorer half in monetary terms, they are rich in culture and heritage. Music, food and creative flair define these areas and a tour to these parts is a must.

A host of museums on a huge range of the usual subjects like natural history, cultural history and just plain ordinary history complement the smaller ones like the District Six museum, a doll museum and a police museum. And, of course, a visit to theRobben Island museum,followed by a ferry trip and a tour of the island itself, where you will get to see Nelson Mandela’s old cell.

Culture is about how people live — how they organize their lives.

So you can choose from a range of cultural tours. Most involve a drive out to one or more of the townships of Nyanga, Langa, Gugulethu, Crossroads or Khayelitsha,

Where you can see how local people live,

Visit historic sites mostly pertaining to the struggle against apartheid,

Shop in the open air markets,

Enjoy a drink or a meal at a shebeen (township tavern)

If you like even consult a traditional healer or sangoma.

Afrikaners, English, Germans and Africans have all found their space in this bustling metropolis of Cape Town, where opera and ballet are often interchangeable with kwaito (a popular South African music genre) and hip-hop.

Another area is the Observatory area, which is Cape Town’s bohemian capital where Rastas, Trendies and students share space, while De Waterkant village is Cape Town’s pink capital and has helped cement the city as an destination of choice for gays from around the world.

Walk Long Street at night and marvel at the mix of locals and visitors and during the day browse the many markets dotted around the city.