We purposely do not have rates on our site as rates change with seasons, availability, contracts change and our quotes are based on current availability/prices.

The lodging on this safari can be upgrade or it can be modified according to how you want it.

Lake Manyara, which packs a lot of diversity into a small area, is the only park in the area that is green all year round.

The park also offers a spectacular view of the Great Rift Valley and the fig forest here is a good place to see monkeys and some of the 350 species of birds that have been recorded here.

With luck, you may spot the tree climbing lions for which the park is famous

The Serengeti is arguably the most impressive wildlife sanctuary in the world.

You will have an afternoon game drive in the endless plains of the Serengeti for a chance to see the great herds of wildebeest, zebras and gazelles or a pride of lions lounging in the shade.

Enjoy full day of game viewing in the vast Serengeti plains where you may encounter the migration consisting of over 2 million animals. They also attract the attention of predators like cheetah and hyena and you may be able to see a band of lions gang up for a hunt. 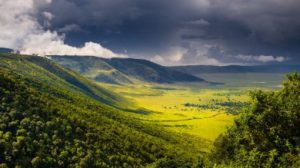 Ngorongoro Crater is the largest collapsed volcanic crater in the world and fourteen kilometers of isolated natural beauty. Ngorongoro Crater is surrounded by a ring of extinct volcanoes and the floor, dotted with watering holes, shelters some 30,000 animals.

Lunch at hippo pool picnic site. Ascend to the rim and departure for Tarangire National Park.

Tarangire National park is known for its majestic baobab trees that dot the landscape, dwarfing the animals that feed beneath them.

The Tarangire River is the centerpiece of this park which is famous for some of the largest herds of elephants in Africa. Here you may see lion, leopard, cheetah, lesser kudu, buffalo, Oryx, eland, giraffe and zebra.