There is so much awesome surf in South Africa, you wont quite know what to do with yourself. But dont despair just do it all.which you can do on this Surfing South Africa  tour.

This Surfing South Africa  can be a self drive or designed as a guided tour, which gives you more rested energy for well yes surfing.

Start off in Cape Town, where the shape of the peninsula and the different prevailing winds and swells ensure that there is almost always something surfable. Stay as long as you need to.

Find out what?s working, and if Elands Bay is, head up that way (you need a car for this, it’s on the West Coast).

Head back to Cape Town.

Start heading up the East Coast. If youre driving try Stilbaai.

After Mossel Bay, you could stop in Wilderness, which can have some pretty good surf, or Knysna, which has no beach and no surf, but which is really close to Buffels Bay, which is great. 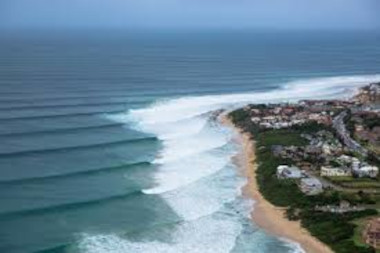 Well obviously, Jeffreys Bay (J-Bay). This is where it all happens. Its a bit overdeveloped and the surf can be crowded but its worth it.J-Bay Bay is probably the most popular surf destination on the coast, which is not surprising as there are some awesome waves, including the iconic Supertubes.

Close by is the small town of St Francis Bay, where Bruce?s Beauties (officially one of the top ten waves in the world) works, when it feels like it ? and when it does, you can follow the pilgrimage from J-Bay.

Port Elizabeth doesn’t have anything to match J-Bay but its a nice town with some cool little waves, and it’s worth stopping in en route further up the coast.

Your next stop could be Port Alfred, or Kowie, as the locals call it. Take a walk down to the pier and, if it’s working, go wild. If it isnt, head off to East London. This sleepy little town has some of the best and most consistent waves in the country.

Stop in at Cintsa, which has some pretty cool surf and a great backpackers, which is very surf-friendly.

Once youve crossed the Kei, youre on the Wild Coast, which is legendary.

Travelling the Wild Coast, traipsing down bumpy little roads, walking for miles with a board under your arm, camping on the beach and searching for (and finding) that perfect wave is a rite of passage for South African surfers. But you can also do it the easy way. Coffee Bay is your best bet.

There is a mega-surfer-friendly backpackers and the waves are ….. well. Try and figure out why one of South Africas top competitive surfers has retired to Coffee Bay.

If you can ever bring yourself to leave the Kei, you might then want to head off to Durban, which is surf city deluxe but its worth stopping over on the South Coast.

Ok youve finally made it to Durban. There is almost always surf, sometimes absolutely awesome surf, and the beach is right in the town. If there are no waves, there should be something close by on either the North or South Coast. And if there really is nothing surfable, you can visit the countrys only surf museum right on the beach.

There are some pretty good spots on the North Coast, as well Ballito has a surf-friendly backpackers, and there are some spots further north but youre starting to lose consistency.