Parts of this tour can be upgraded to 5 star lodging.

Arrive at Johannesburg airport – freshen up at the airport courtesy lounge- depart for tour of Soweto with lunch at Wandies.

Soweto (originally an acronym for South Western Townships) developed from a geographical location into an international symbol of victory over oppression. Overnight Johannesburg.

Depart for Sterkfontein caves where the ape-man fossils that have been found gave rise to the suggestion that Africa is the “cradle of mankind”.

The significance of the Sterkfontein discoveries and the importance of the area in tracing the evolution of man has been recognised by UNESCO in declaring this a World Heritage Site.

Travel to Pretoria to visit the Union Buildings. Transfer to Johannesburg airport for flight to Durban. Overnight Durban.

Morning tour of the Townships of Durban, formally hotbeds of political dissension and conflict where many of the great leaders of the struggle against apartheid were born, worked or died.

To-day the Townships, home to some 2,5 million people, exude a vibrant, friendly atmosphere.

This region is redolent with the culture and history of the Zulu nation whose dominant position as the largest population group in the country arose from the military conquests and diplomacy of King Shaka in the early 19th century.

A proud and dignified people, famous as fearsome warriors, they hold strong beliefs which are still widely practiced to-day. Overnight at Hilltop camp.

This typical bushveld country is home to the Big 5 and many other species. It is the oldest reserve in Africa and, amongst other notable conservation successes, is where the white rhino was saved from the brink of extinction.

Here is a glimpse of the heartbeat of the old Africa where the mighty beasts reign supreme.

Full day game viewing with a picnic lunch in the reserve.

Morning game viewing on the way to the St Lucia Wetland Park.

The Park which contains five different eco-systems was recently declared a UNESCO World Heritage Site. This is a unique conservation area, a wetland of international significance and of national pride.

The day includes a boat cruise, a walk in the St Lucia Reserve and a picnic at Cape Vidal.

After breakfast transfer to Kosi Bay in Maputaland, the north-eastern region of KwaZulu Natal.

This area is inhabited by an interesting mix of Thonga, Zulu and Swazi people and despite facing the onset of change still offers the visitor a unique opportunity of experiencing how the people have interacted with their natural environment for hundreds of years.

After breakfast at the lodge, boat trip to see the fascinating method the Thonga have used for 600 years to catch fish by means of an intricate system of traps made from reeds and baskets.

After lunch, game drive in an open vehicle.

The fully grown adults are physically the biggest in South Africa and make for spectacular viewing in the mosaic of sand forest, woodland, grassland and swampland.

After breakfast depart for Thembalethu Craft Village and iLala Weavers which was established 20 years ago with the objective of revitalising and enhancing the traditional handicrafts of the Zulu women which were in danger of being lost forever.

To-day iLala Weavers helps over two thousand Zulus to attain self sufficiency by providing them with an outlet for their superb basketwork and beadwork.

After lunch transfer to iPhiva, a fascinating example of community focused tourism development with accommodation in floating chalets.

After a sundowner cruise and dinner, visit the local kraal (village) to enjoy the evening with a family, watching their traditional dancing and learning about their lifestyles and customs. Overnight iPhiva.

Depart for Penwarn, an exclusive country retreat in the Drakensberg mountains.

Known by the Zulus as the “Barrier of Spears” the Drakensberg mountains, formed 150 million years ago, rise to over 3000 meters.

Almost the entire area is a protected park and is one of the scenic showpieces of Southern Africa with spectacular natural beauty, and true tranquility.

Afternoon guided tour to hear about the San (Bushmen), the hunter-gatherers who lived in the area for about 7000 years until the 1800″s.

They left behind paintings, daubed with exquisite skill on the walls of caves and overhangs, which give us an insight into their lives, their rituals and beliefs. Overnight Penwarn.

Depart on the spectacular 4×4 vehicle excursion to the top of Sani Pass and into the Kingdom of Lesotho (known as the Roof of Africa).

Visit a village to see how these hardy people live. Lunch at the highest pub in Africa before the breathtaking decent. Optional late afternoon activities: Birding walk, trout or bass fishing. Overnight Penwarn.

Morning transfer to Durban. The afternoon is spent learning about the Indian population.

From the time of the arrival of the first Indian indentured labourers in the 1860’s the Indian population of KwaZulu Natal has grown to what is reputed to be the largest outside India.

They have retained much of their rich cultural heritage as can be seen in the beautiful mosques, colourful temples, vibrant festivals, classical dances and exotic foods.

Dinner is at a shabeen during the evening tour of the lively townships surrounding Durban. As African urban settlements began to grow around the city, the shabeen became the place where people came to relax, meet friends and have a drink.

Here you will have the chance to listen to music and to talk to the locals. Overnight Durban 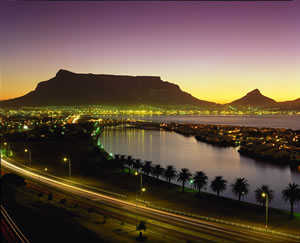 Early breakfast and transfer to the airport for flight to Cape Town.

Afternoon orientation tour of the City including the colourful Bo-Kaap or Malay Quarter, traditional home of the Cape Malays who have maintained their Muslim identity and made significant contributions to the South African language and cuisine.

Ferry trip to Robben Island for a tour of the prison where Nelson Mandela was held. Dinner at Africa Café which offers a mouth-watering array of African dishes. Overnight Cape Town.

Weather permitting, early departure for cable car ride to the top of Table Mountain for breakfast while enjoying one of the world’s most memorable views.

A tour of the Winelands includes visits to some of the progressive farms where the workers, with the support of the owners have started to produce their own wines with the evocative labels such as “Freedom Road” and “New Beginnings”.

Picnic lunch at one of the farms and a visit to Stellenbosch, in the heart of the Winelands. Dinner at a seafood restaurant in Hout Bay to watch the sun set across the ocean.