Meander through vineyards, taste superlative wines, participate in cellar tours, and be treated to magnificently stocked picnic hampers. The Cape Winelands are only a short 45 minute drive  from Cape Town.

Since this is a custom designed tour we can create it as you want it , longer, shorter and it can be on a vegan basis with vegan meals, wines, cheeses etc. 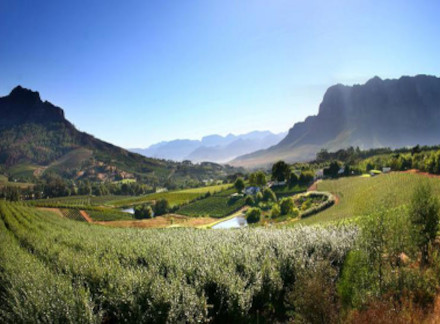 This can be a self drive or a privately guided 4 Days / 3 Nights meander through the inner and outer winelands.

If you self drive we do the car rental which will have full rental insurance included, and lodging reservations, and give you point to point driving instructions.

When we do the final trip walk through we will give you ideas of restaurants, wineries, and of course where the boutique chocolate shops are.

If its guided, the guide will be available to drive you and will offer suggestions about wineries, restaurants, shopping for both the inner and outer winelands.

Included is an evening of unforgettable dining at Moyo’s Restaurant at Spier, which captures the essence of the unique Cape African culture and warm hospitality.

The Western Cape is home to the most colorful Wine Route in the world, with local wine estates beautifully appointed marvels of décor, landscaping and ritual. Here’s a selection of Cape wine estates to introduce you to the lure of the vine…

As one of South Africa’s leading ambassadors and one of the most recognized faces in world sport, it is befitting that Ernie Els chose South Africa and Stellenbosch to produce his wine. Ernie Els wine was born from a long-standing friendship between Jean Engelbrecht of Rust en Vrede and the world-renowned golfer. ‘We have been planning this for a long time, so it is exciting to see it come together’, said Ernie Els.

‘With all the wines that we have shared together through the years, it became clear that Ernie’s palate leaned towards Bordeaux-styles wines’, said Engelbrecht. ‘So when we decided on this venture, I knew the wine had to be a classic Bordeaux blend including all five varietals – an extension of his personality.’

The wine is a blend of Cabernet Sauvignon, Merlot, Petit Verdot, Malbec and Cabernet Franc and is aged in new French oak barrels for 18 months. Plans are to steadily increase production over the next few years to an annual output of 15 000 cases. 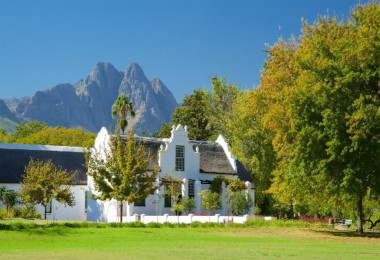 Part of former Governor Simon van der Stel’s original farm, Morgenster Estate lies in the Lourens River Valley in Somerset West. Grapes have been grown on the grounds for more than 300 years.

In 1993, Giulio Bertrand bought the property with a vision of making the highest quality olive oil as well as a Bordeaux-styled wine. The Bertrand philosophy on Morgenster was simple, but uncompromising: a single-minded focus on a red blended wine from only quality grapes.

The wine would be made with minimal manipulation in order to be true to the terroir, which is stony, with a range of altitudes and aspects. The wine is a blend of 70% Merlot, 27% Cabernet Sauvignon and 3% Cabernet Franc – distinctly elegant, with a subtle mouthfeel.

The wine cellar was designed by Revel Fox & Partners, working in association with wine engineers from France and South Africa, and winemakers Marius Lategan and consultant Pierre Lurton of Chateau Cheval Blanc.

In the early 1970s, Warwick Estate founder Stan Ratcliffe saw his first ‘marriage cup’ on a friend’s dining room table in London. Stan and his wife Norma searched the city for another, discovering one in the silver vaults at Chancery Lane.

The Ratcliffe family today owns a substantial collection of ‘marriagecups’, exquisitely crafted in silver and glass. The custom of this cup comes from an old German one: ‘There was a king who had a beautiful daughter who loved the son of a local silversmith.

When the young commoner had the cheek to ask for his daughter’s hand in marriage, the king was so incensed he threw him in jail. The broken-hearted princess became thin and wan, and the king feared for her health.

‘So he released the young silversmith, declaring that he would allow the couple to marry if the boy could make a drinking cup that two people could sip out of at the same time – seemingly impossible. However, the clever silversmith came up with the marriage cup that solved the puzzle.’

Today, Stan’s son Mike is the next-generation Ratcliffe to run Warwick, having inherited his father’s business skills and Norma’s wine-making expertise. Besides the flagship wine, Trilogy (the 1999 of which won gold at London’s International Wine Challenge) the estate also produces Three Cape Ladies, which is quickly becoming a Stellenbosch legend.

The Village, a wonderfully Bo-Kaap-styled hotel, set in a backdrop of vineyards and mountains is one of South Africa’s top tourism drawcards: SpierWine Estate. Rooms are large and airy and the fireplace is decidedly romantic.

Everything has a special origin or touch. Handmade soaps, thick and cuddly shower robes, good filter coffee and some welcome sherry in a decanter. No wonder The Village at Spier is a member of the prestigious Small Luxury Hotels of the World.

One has a choice of 5 restaurants on the estate, which has also become an international conferencing and banqueting destination – the farmstall, coffee shop, option of a picnic basket, the wine center and the tapestry weavers.

For entertainment, a full Summer Arts program is available at the Spier Theatre, where African-origin shows mingle with international live performances from Spanish dance to Russian ballet.

Come down to the Cape Winelands  and let yourself be tantalized by the grape. They’re laying out the tables and uncorking the wines as we speak…